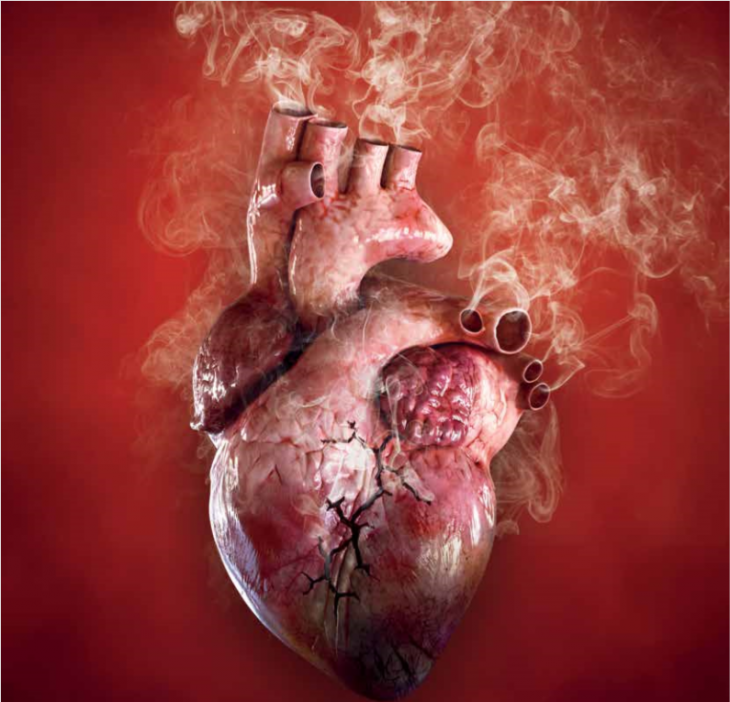 Mark Twain once said “Giving up smoking is easy…  I’ve done it hundreds of times!”. And he eventually died from a heart attack. Are you wondering what’s the point I am trying to make here?  That’s exactly the point! 36% adult Indians do not know/believe that smoking causes heart attack, 51% do not know it causes stroke.

17% of all cardiovascular deaths are attributable to tobacco usage or second hand smoke exposure.

How much you smoke and for how long you have been smoking decide your risk of heart disease, but this tobacco dose–risk relationship is not linear. The risk is substantially increased by exposure even to low levels of tobacco. In fact, by smoking even a single cigarette per day you end up taking on half the risk of developing heart disease/stroke as you would by smoking 20 cigarettes a day! So even if you are just a ‘social’ smoker trying to bond with colleagues over a smoke, you are putting yourself at great risk.

What’s the evil thing in tobacco?

Tobacco smoke contains over 7000 chemicals and is divided into two phases: a particulate phase and a gas phase. The particulate phase of smoke contains nicotine which is highly addictive and causes increase in heart rate, blood pressure and efforts spent by the heart during its pumping action.  The aerosol residue (tar) in addition contributes to heart disease by causing inflammation, damage to the lining of the blood vessels, formation of clots and reduced level of HDL cholesterol.

The gas phase contains the poisonous gas carbon monoxide, along with other gases. Carbon monoxide replaces oxygen in the blood, thereby reducing the availability of oxygen for the heart muscle and other body tissues.

This causes narrowing of the arteries, leading to various types of heart diseases.

How tobacco affects the heart and your body :

If you thought you were reducing the damage using Smokeless tobacco…

e-cigarettes are battery-operated devices that heat a solution, or e-liquid, to generate an aerosolized mixture containing flavoured liquids and nicotine that is inhaled by the user. They also emit various potentially harmful and toxic chemicals that have known health effects. The mixture contains nicotine, to which the cardiovascular system is very sensitive. Body suffers from narrowing of the arteries, increased heart rate and blood pressure as a direct effect from the use of eCigarettes. Also, non-users, including children suffer the risk of heart disease through second-hand smoke. So, these are in no way less risky than smoking cigarettes.

Benefits in comparison with those who continue to use tobacco

• After the onset of life-threatening disease: rapid benefit – people who quit tobacco after a myocardial infarction reduce their chances of death by between 36% – 46%

Don’t wait too long. Make the decision today to choose HEALTH, not TOBACCO!